In the last few months, Swindon Anarchists have been teaming up with our mates over at People’s Assembly and Swindon Calais Solidarity to offer practical solidarity to the 7,000 refugees living in the camps of Calais. As well as helping to meet the day to day needs of the refugees, we have been doing what we can to build bridges of solidarity and practically support refugees in resisting the violence and racism of the French and English states, whether in the form of tear gas and truncheon happy riot cops, or the razor-wire topped border itself.

In early December, Swindon Anarchists organised 4 vehicles rammed with supplies and volunteers to embark on our second trip to Calais. After a brief stop at a warehouse on the outskirts of Calais to drop off clothes, tents and sleeping bags, we moved on to the camp itself.

As winter continues to bite, we found a subdued atmosphere in the camp, with the majority of the residents staying in their tents and shelters. However, we were glad to see that many of the tents are being replaced with semi-permanent structures which offer more protection from the elements. Our first stop in the camp was the Eritrean area, still recovering from the fire that recently swept through it. As the Eritreans are unlucky enough to be situated near the motorway bridge, they have come under the most direct attack from the police, who have stepped up their shitty habit of indiscriminately launching tear gas into the camp. We found camp residents very receptive to ideas and supplies aimed at offering some protection against tear gas. 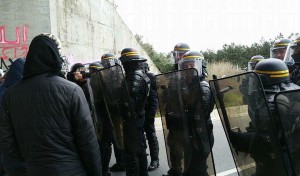 Halfway through the day, hundreds of camp residents took part in a protest calling for decent treatment, the right to live in the UK and in memorial of a 16 year old camp resident recently killed by the border regime while attempting to enter the UK. Noticeable amongst the placards and banners were a number of messages of sympathy for the victims of the Paris attacks and making the point that many refugees were also victims of ISIS. After coming face to face with a wall of riot cops, protesters sat in the road, chanted and listened to speeches. We were glad to be able to join the action and would like to express our full solidarity with those inside the camp and around Europe that are taking action against borders and the violence that accompanies them.

We finished the day by visiting some Sudanese friends and, while we were sad to find out they had not successfully crossed the border, were glad to see that their accommodation had improved from our last visit. After a cup of tea, some swapped phone numbers and an unsuccessful attempt to persuade our hosts that Swindon Town FC were a better team than Man Utd, we left for the day.

While we see the need for the camps to be supplied with donations to make day to day life more bearable, our trips have not been just about charity. As anarchists, we reject the very concept of nations and borders and embrace the rights of all people, not just rich westerners, to freedom of movement. We live in a country in which the vast majority of housing, resources and wealth are controlled by a tiny minority. While the ruling class continue to wallow in luxury, we reject the idea that we are ‘full’ or that we ‘can’t afford’ to offer sanctuary for people fleeing poverty, oppression and bombs dropped by our own leaders in the name of profit. We have more in common with refugees that with our leaders and bosses, who simultaneously stoke hatred of foreigners while hiking our rents, slashing our wages and decimating our schools and hospitals.

Over the course of our two trips, we have raised over £2,500 from ordinary Swindonians, not to mention enough tents, warm clothes and sleeping bags to fill our houses several times over. We feel not only massive gratitude, but also optimism at the level to which the people of Swindon have responded to our calls for solidarity. Plans for a return trip are already being made, and as with the last two, will rely on the support of our community to be successful so watch this space to find out how you can help in future.

For a world without borders or bosses!